Home > Case Studies > Turn a Talent Into a Fundraiser

Turn a Talent Into a Fundraiser 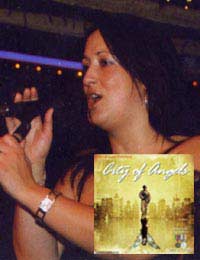 Having a particular talent can turn a lifelong dream into a fundraising opportunity. Pursuing a dream can lead from singing in a local choir at the age of 8 to releasing a fundraising single and album.

The Beginning of a Fundraising Success Story

Like many singers Elaine Stewart began her musical career in her local church choir in Dundee. “From the age of eight I sang in the local church choir and then in my high school choir at 13. Also, as all young girls do, I did of course blast out songs in my bedroom.” After leaving school at 16, Elaine joined a local band, but as she said, “We never actually played a live gig. Her next step was to move to London. “I wasn’t actually pursuing a singing career but the thought was never far from the back of my mind.”

Making the Move to London

Like a number of British people do at an early age, Elaine headed down south to London and soon found herself singing as lead singer in a number of pop, rock and blues bands. “The bands I sang in such as Shot T’ Funk and Ironik built up quite a following and the buzz of being on stage was incredible.” In all, Elaine honed her singing skills over the course of 14 years in clubs in the London and the Essex area. At the age of 39 Elaine decided to move back home. “I was incredibly sad to leave the life I had built up down south. But I made the decision to move back and spend more time with my parents.”

The Beginning of a Musical Collaboration

After moving back to Scotland Elaine and her husband Dan set up their own retail business but singing was never far from Elaine’s mind. After a break of a year the drive to get back into music returned and Elaine placed an advert on a website called Bandmix. “I was contacted by Chris Gibson who was looking for a singer who could also write lyrics,” said Elaine. “Chris has been a musician since his teens and is incredibly talented. His music spans a number of genres and he has been placed second in the British Amateur Recording Contest in 2008 and 2009.” Elaine and Chris began composing and recording their first album of melodic dance tracks under the name CrimsonOrange.

Setting up a Musical Fundraiser

Chris composed the music to a haunting melodic ballad entitled City of Angels, and Elaine had the task of writing and singing the lyrics. “I had just lost my Dad due to an illness and had just found out my Mum had been diagnosed with inoperable lung cancer. She was having to fight this illness and grieve for my Dad at the same time,” she said. “The lyrics came from the emotions I was feeling during that time. Remembering all the memories of when my parents were young and growing old together.” A fundraising song had been mentioned initially and when the ballad was finished it stood out as an obvious choice for a fundraiser.

Deciding on a Fundraising Cause

Elaine and Chris used many methods to publicise the Help for Heroes single. “We used social networking sites such as Facebook and Twitter to help keep the overheads low as well as flyers posted around the town centre.” Elaine’s husband Dan was the creative brains behind the impressive cover designs for both the City of Angels charity single and the Chase the Light album. “In the end we just brainstormed how to get the single out there including obtaining radio play on local radio stations,” said Elaine.

Reaction to the City of Angels Charity Song

The reaction to the song has been extremely positive. “For a new band we have been getting a lot of support and airplay and this has resulted in a great number of sales for the single and donations to the charity,” Elaine said. “The whole process of writing and creating this song has been an emotional one. I am extremely proud to have been part of this. It means a great deal to me as both a tribute to my parents and towards raising funds for injured British military men and women. ”
Next Page

Raising Fund Via the Internet: A Case Study